As part of the Leukaemia Week 2015 (from 21st to 28th of June), the Josep Carreras Leukaemia Foundation developed an awareness campaign in June named "Unstoppable against Leukaemia," which aimed to raise funds for scientific research.

To this end, we encouraged society to collaborate by sending supportive SMS with the word "IMPARABLES" (which means "unstoppable") to 28027 (SMS cost: € 1.2 Full donation. Available for Movistar, Orange, Vodafone and Yoigo cell phones). The campaign had a remarkable hype in press, radio, television, digital media and out-of-home advertising.

In addition, on 21st June, the first day of the Week against Leukaemia, and being the fourth consecutive year, we went outside accompanied by more than 300 patients and former patients of leukaemia, lymphoma, myeloma and other hematological malignancies, who encouraged people to collaborate by sending SMS and shared their testimony delivering custom brochures to raise awareness about the importance of further research on the field of blood diseases.

The supportive text messages raised a total of € 18,482 (on 31st July) which have been invested on scientific research through our Josep Carreras Leukaemia Research Institute. 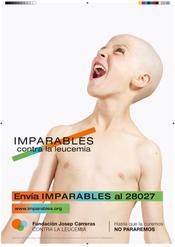