Are you thinking of creating your own event to benefit the fight against leukemia? Do you want it to be a success of participation and fundraising? Learn about the next steps! 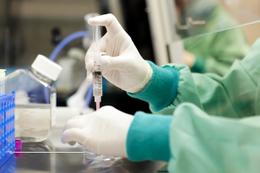 WITH YOUR HELP, WE WILL BE UNSTOPPABLE!

With €100 you maintain this experimental unit for one day. Every small donation, ADDS.

The research group led by Dr. Ethel Queralt of the Institute of Biomedicine of Valencia (IBV-CSIC), in collaboration with Dr. Manel Esteller, Director of the Josep Carreras Leukaemia Research Institute, publishes in Nature Communications a work that reveals the molecular basis of Cornelia de Lange syndrome, a rare disease that affects development during pregnancy and causes abnormalities in the upper extremities, delayed growth and psychomotor abilities, intellectual disability, among other symptoms. The study identifies a key alteration in the function of a set of proteins that causes problems on DNA’s packing and, therefore, in the expression of the genes involved in the origin of the disease. By introducing a gene without this alteration into cultured cells of patients, the researchers were able to reverse most of the negative effects, suggesting that gene therapy in the newborn could alleviate some symptoms.

Cornelia de Lange syndrome (CdLS) is a non-hereditary developmental disorder that appears sporadically during the early embryonic stages. The prevalence is variable, oscillating between 1 in 10,000-30,000 births. It was first described by the Dutch pediatrician Cornelia de Lange in 1933. In 2004, the first gene associated with the development of the disease was described (called NIPBL) and later on, four more genes were identified: SMC1A, SMC3, RAD21 and HDAC8. All of them have in common that they encode proteins related to the cohesin complex, a set of proteins responsible for maintaining the structure of chromosomes that contain the genetic information of DNA.

“Most Cornelia de Lange patients have a mutation in genes of the protein complex called cohesin or its regulators. Our objective was to study how mutations in these genes cause the disease”, says Ethel Queralt, scientist who leads the study.

“It is interesting to remember that, in recent years, the presence of alterations in genes that control the activity of the genome has been discovered as the cause of many rare diseases such as Rett Syndrome and Sotos Syndrome, and now this study reveals that these mechanisms are also altered in people affected by Cornelia de Lange”, explains Manel Esteller, researcher at the Josep Carreras Leukaemia Research Institute and researcher participating in the study.

Gene therapy against the disease

The study of the molecular bases of the disease was restricted due to the lack of knowledge on the genes that cause the disease. Now, this study shed light for the first time on those mechanisms, helping to know how the disease occurs, correctly diagnose it and even seek for a treatment. "The biggest problem continues to be the late diagnosis of patients, something common in all rare diseases," says Queralt.