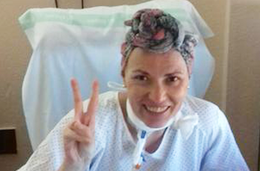 Hi! I am Mercedes. I was diagnosed with acute leukaemia in 2017. At the end of the year, I received a bone marrow transplant from an anonymous donor located by the Foundation."

We will continue investigating until leukaemia, lymphomas and other malignant blood diseases are curable in all cases. Discover the testimonials of many patients who have overcome the disease or are fighting against it.

What is adult acute lymphoblastic leukaemia and whom does it affect?

Acute lymphoblastic leukaemia (also called acute lymphocytic leukaemia or ALL) is a kind of blood cancer in which, for reasons that are not known, an excessive number of immature lymphocytes are produced (lymphoblasts). The cancer cells multiply rapidly and displace normal cells in the bone marrow, the soft tissue inside the bones where blood cells are formed.

Under normal conditions the lymphocytes are produced in the bone marrow and other organs of the lymphatic system (thymus, lymph nodes, spleen), and are responsible for the body's defences, being capable of attacking any invading agents or anomalous cells produced by the body either directly, or through the production of antibodies. In ALL the lymphoblasts (precursors of the lymphocytes) are produced in excessive quantities and do not mature. These immature lymphocytes invade the blood, the bone marrow, and the lymphatic tissues, causing them to become inflamed and swollen. They can also invade other organs such as the testicles and the central nervous system.

Although ALL usually affects children it is not infrequent to observe it in adolescents and young adults. In the case of adults, this kind of leukaemia usually affects males with an average age between 25 and 30. Only 10 - 15% of patients survive beyond the age of 50. In Spain the annual incidence of ALL in adults is 30 new cases per million of population per year.

Acute lymphoblastic leukaemia can affect B lymphocytes, which produce antibodies to help combat disease, or T lymphocytes, responsible for coordinating cell-mediated immune response. For this reason the WHO classifies ALL in accordance with kind of lymphocytes affected and their degree of maturity, drawing the following distinctions:

Chromosomal translocation (when a segment of a chromosome becomes attached to another chromosome) can be observed in all of them, as well as alterations in certain genes that affect the prognosis and the treatment for the disease. For example, the presence of the Philadelphia chromosome, with a translocation between chromosomes 9 and 22 [t(9;22)], implies a particularly poor prognosis for this type of ALL and it requires a different treatment from the other ALL.

The clinical manifestations presented by patients suffering from acute lymphoblastic leukaemia reflect, on the one hand, bone marrow failure, that is to say, the failure to produce normal blood cells as a consequence of the proliferation of lymphoblasts in the bone marrow and, on the other hand, the infiltration of various organs and tissues by the lymphoblasts. The initial phase is almost always acute and the clinical manifestations tend not to predate diagnosis by more than two months. Most usually patients present symptoms such as: loss of appetite; sense of weakness and fatigue; fever; bone pain; joint pain; muscular pain; and bruising on the arms and legs; caused by the lack of platelets. Sometimes spontaneous bleeding occurs (nosebleeds, bleeding from the gums) or excessive bleeding from small injuries.

Some patients may present infections (abscesses, sinusitis, pneumonia, etc.) as an initial symptom. Others may present an increase in the size of the lymph nodes, and abdominal disorders as a consequence of the growth of the liver and spleen. A small percentage of patients may present manifestations as a consequence of the compression of neighbouring structures (for example, those inside the thorax) caused by inflamed lymph nodes, or symptoms caused by the invasion of the central nervous system (headaches, vomiting, somnolence, etc.), the testicles (pain, swelling), or the bones (bone pains).

Although any organ may be infiltrated by the lymphoblasts, those most commonly affected are the liver, the spleen and the lymph nodes. In the case of children, the frequency of infiltration of these organs is 80%, 70% and 50% respectively, and somewhat less in case of adults. The infiltration of other organs such as the breasts, testicles, the skin and mucous membranes is very infrequent at the time of diagnosis, although they may constitute the initial location of relapse.

A precise diagnosis requires various extractions of blood and of the bone marrow (the latter being obtained by means of sternal puncture or of the hip bone) in order to perform various analyses, such as the number of leucocytes, red blood cells and platelets, and the exhaustive study of the lymphoblasts under the microscope, as well as other diagnostic techniques such as the study of the phenotype, the study of chromosomal alterations and of possibly altered genes. Additionally, X-rays are performed to determine whether there is an increase in the size of the lymph nodes of the thorax or abdomen, and a lumbar puncture is performed in order to analyse the cerebrospinal fluid it contains to determine whether the disease has spread to the central nervous system.

Treatment for acute lymphoblastic leukaemia is determined on a case by case basis bearing in mind the patient's age and general condition, as well as other factors with prognostic value such as the number of leucocytes and the existence of chromosomal alterations or that of certain genes.

The main aim of any leukaemia treatment, or treatment for any other malignant blood disease, is to achieve complete remission, that is to say the elimination of as many leukaemia cells as possible. At present this can be measured by studying the minimal residual disease using specific techniques capable of detecting molecular alterations. In order to achieve this aim, treatment is administered over three phases: remission induction; consolidation/intensification; and maintenance.

Remission induction therapy is always based on intensive chemotherapy, consisting in the intravenous administration of various anti-leukaemia drugs with the aim of achieving the disappearance of leukaemia cells from the blood and from the bone marrow, enabling the normal production of the other blood cells. This clinical situation of complete remission is usually achieved after the first course of treatment in 80 - 85% of adults. The patient is considered to have achieved complete remission when the number of lymphoblasts in the bone marrow is loswer than 5%.

There must then be a course of consolidation/intensification therapy the aim of which is to reduce the residual disease as much as possible. This therapy starts once the leukaemia is in complete remission. The aim of the consolidation and intensification therapies is to destroy the remaining leukaemia cells which, while they may not be active, may start to reproduce and cause a relapse. The number of courses and their composition varies depending on the various therapeutic protocols.

The third phase of treatment is called maintenance therapy, the aim of which is to destroy all remaining leukaemia cells that may, in the long term, reproduce and cause a relapse. This phase of the treatment lasts for two years. At regular intervals throughout this time, and with the aim of eliminating leukaemia cells that may possibly be lurking in the nervous system, various lumbar punctures are performed to administer treatment at this level.

The treatment described thus far is generally administered to patients considered to be of standard risk, that is to say, patients for whom the disease has a more favourable prognosis. For patients considered to be high risk (with a higher risk of relapse, or after a relapse) a hematopoietic progenitor transpalnt is indicated (bone marrow, peripheral blood, umbilical cord blood) from a compatible donor (allogenic transplant), ideally a histocompatible brother or sister or, failing that, a non-related voluntary donor, found through a world-wide search, or a unit of umbilical cord blood. Recently, transplants are also being performed from partially compatible family members when it is not possible to perform one of the transplants mentioned above. These transplants are called haploidentical transplants.

Autologous transplants of hematopoietic progenitors are generally not included in the protocols for the standard treatment of ALL due to the high risk of relapse after them (more than 60%).

Recently, a new kind of treatment for acute lymphoblastic leukaemia has been introduced, called immunotherapy. This consists in specifically attacking the leukaemia cells with monoclonal antibodies and, more recently, with T-cell lymphocytes that have been genetically modified so that they attack the lymphoblasts with precision. Immunotherapy is currently administered to patients with acute lymphoblastic leukaemia with B-cell phenotype who have suffered a relapse, but research is underway to determine whether, in the near future, it could be successfully administered during the initial treatment of the disease.

'CAR-T inmunotherapy or how to redesign our own cells to atack cancer'. Visit this article in our BLOG.

The prognosis for patients affected by acute lymphoblastic leukaemia varies substantially depending on various risk factors. Age, the initial lymphoblast count, the ALL subtype in question, the presence of extramedullary localisations (mediastinum, nervous system, testicles), the presence of genetic anomalies, and, very especially, lentitude in achieving complete remission after initial treatment, are the predictive parameters for a poor prognosis. At the present time, the most important prognostic parameter is the amount of residual disease a patient may have after induction and consolidation therapy.

*These figures are statistical averages which can not, in any way, be applied to individual cases because the evolution of each patient absolutely depends on their general condition, age, and any possible complications they may present

There are various subtypes of acute lymphoblastic leukaemia:

- Mature B-cell lymphoblastic leukemia B-ALL (Burkitt-type ALL). With present-day treatment models the prognosis for this type of ALL has improved notably with survival rates approaching 70% without the need for a transplant in many cases.

- ALL with Philadelphia chromosome. In spite of the progress that has been made with the use, in combination with intensive chemotherapy, of new tyrosine kinase inhibitors (imatinib, dasatinib, nilotinib and ponatinib), this type of ALL unfailingly requires an allogenic bone marrow or umbilical cord blood transplant from a related, or non-related donor to achieve a cure (something achieved by 50-60% of patients at the present time).

For more quality information about adult acute lymphoblastic leukaemia you can consult the following websites:

There are other resources and links of interest that may be of use to adult acute lymphoblastic leukaemia patients:

You can also check other interesting links here.

If you are resident in Spain, you can also contact us via email comunicacio@fcarreras.es so that we can help put you in contact with other families who have overcome this disease.