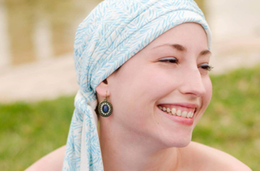 "Hi, my name is Amanda, and when I was about to turn 25, I was diagnosed with Hodgkin's lymphoma. Cancer? Me? Yes!, it was. After many chemo sessions and a bone marrow transplant, today I am completely recovered"

What is Hodgkin lymphoma?

Hodgkin lymphoma (HL) is a cancerous disease of the lymph nodes. The lymphatic system is a network of organs, lymph nodes, ducts and lymphatic vessels that produce and transport lymph from the tissues to the blood stream. It is a fundamental part of the body's immune system.

The malignant cells responsible for the disease, called Reed-Sternberg cells, are B-lymphocytes. However, if the lymph node of a patient suffering from Hodgkin lymphoma is examined under the microscope it can be observed that the Reed-Sternberg cells only account for a small proportion of the cells occupying it (5%). The rest of the lymph node is occupied by what is known as an 'inflammatory infiltrate' made up mainly by T- lymphocytes and other cells such as eosinophils and macrophages. Although Hodgkin lymphoma is a disease of the lymph nodes, and it is these organs that are principally affected by it, all those parts of the body, at least in theory, that contain lymphoid tissue may be affected by the disease (liver, spleen, bone marrow, tonsils, etc.). This, however, is infrequent, at least at the time the disease is diagnosed.

The cause of Hodgkin lymphoma is unknown. In principle it is neither an infectious nor a hereditary disease, there are no environmental factors that are clearly associated with its development and, although in some cases the presence of Epstein Bar virus can be detected, the causal relationship between the virus and the development of the disease is not, at the present time, well known.

Hodgkin lymphoma is an infrequent disease accounting for approximately 20-25% of all lymphomas and, in Spain, it has an incidence of 30 new cases per million, per year. It has two peaks of incidence. The first amongst young patients between 15 and 35 years of age and the second amongst older patients over the age of 55. The first peak more commonly affects women and the second more commonly affects men. It is infrequently found in children, accounting for approximately 5% of childhood cancers.

Most HL (80%) are of the classic type. There are four subtypes according to the accompanying cell function. They are, ordered from best to worst prognosis:

In most cases, patients display no symptoms at the time of diagnosis (60-70%). The most frequent cause for consulting a doctor is the appearance of a swollen lymph node, especially those found in the area around the neck (they are often confused with secondary inflamed lymph nodes, mouth, tooth or ear infections). Sometimes these swollen lymph nodes are found in the armpit or groin. Patients often visit the doctor on account of having a persistent dry cough and a thorax X-ray reveals a mass at the level of the mediastinum (a region between both lungs). More infrequently patients experience abdominal pain due to a swelling of the spleen. Only in 25-30% of cases do patients present so-called B symptoms (weight loss greater than 10% over a six month period for no obvious reason, fever and night sweats). Sometimes patients may experience generalised itching skin, and scratch-induced lesions of several months' evolution prior to diagnosis (10-15% of patients), or pain in the lymphatic nodes that occurs some minutes after the consumption of alcohol (especially in young patients).

Hodgkin lymphoma must be diagnosed by means of a biopsy of a suspected lymph node. Puncture and aspiration of an inflamed lymph node, a technique used very frequently to diagnose solid tumours in cancer medicine, is not a valid technique to diagnose lymphomas in general because they do not enable the structure of the lymph node to be examined under the microscope. In some cases a core needle biopsy may be performed.

From an anatomopathological perspective, and following the latest World health Organisation's classification, Hodgkin lymphoma can be divided into two large categories:

Once the disease has been diagnosed it is necessary to perform an extension study into it, that is to say, it is necessary to discover the extent of the disease at the time the patient was diagnosed. This requires a hemogram, a biochemical blood test, and an image test to detect the presence of pathological lymph nodes or other affected areas (at the present time the test involves positron emission tomography in association with computerised axial tomography PET/CAT) and, in cases in which the PET/CAT test proves negative, it is no longer recommended to perform a bone marrow biopsy.

The extension study enables patients to be classified at different stages according to the Ann Arbor classification:

Stage I. The lymphoma affects a single lymph node region or affects only one organ outside the lymphatic system.

Stage II. Two or more lymph node regions on the same side of the diaphragm are affected.

Stage III. Various lymph node regions are affected on both sides of the diaphragm.

The Ann Arbor classification is accompanied by the letters A, B, E or S:

B. Presence of B-type symptoms.

E. Extranodal or adjacent regions affected due to spreading from a lymph node or packet of lymph nodes.

S. The spleen is affected

At the present time Hodgkin lymphoma is the blood cancer that can most frequently be cured. It has been possible to significantly improve patients' long-term survival rates over recent years, especially in the case of young patients. Treatment for Hodgkin lymphoma is based on the use polychemotherapy in association, occasionally, with radiotherapy on an affected area, high-dose chemotherapy and autologous transplant of hematopoietic progenitors and, currently, also with the so-called 'new drugs' for treating this disease. The prognosis for primary refractory patients after first-line treatment, or who relapse after having achieved complete remission, is not so good. It is important to repeat a biopsy on a clinically pathological lymph node to demonstrate the relapse of the disease from a histological point of view.

There are other, more intensive, chemotherapy protocols that are more effective at controlling the disease, but they are also more toxic and are not very frequently used in our country (for example, scaled BEACOPP).

Second-line and later treatment. Although the results from first-line treatment are good, 5-15% of patients are primary refractory (do not respond to first-line treatment) and 30% of patients, after having achieved complete remission, suffer a relapse. These patients are treated using second-line chemotherapy protocols. These treatment are more intense than those of first-line treatments and, above all, they employ different drugs to those used in first-line treatment. If the patient achieves a response it is indicated to consolidate it with high-dose chemotherapy and an autologous transplant of hematopoietic progenitors. Patients who relapse after the transplant have a worse prognosis. Relatively recently patients who relaps after an autologous transplant may be considered candidates for an allogenic transplant of hematopoietic progenitors from an identical sibling, a compatible non-related donor or, more recently, a related haploidentical donor.

At the present time 'new drugs' are available for the treatment of Hodgkin lymphoma and they are indicated for relapsed or refractory patients. The first of them is brentuximab vedotin, a monoclonal anti-CD30 antibody that has proved very effective, and which has a very acceptable toxicity profile in relapsed or refractory patients after an autologous transplant, or who have failed to respond to two different lines of previous chemotherapy and are not candidates for an autologous transplant of hematopoietic progenitors. The second group of new drugs being used at the moment for the treatment of these patients are checkpoint inhibitors (nivolumab, pembrolizumab) that are currently indicated for patients who relapse after an autologous transplant and who also fail to respond to treatment with brentuximab vedotin. Nivolumab and pembrolizumab are also very effective drugs and are well tolerated by most patients.

As with any neoplastic disease, prognosis will depend on the histological type of HL, its extension and the response to treatment. If there are no adverse factors, and patients have been correctly treated, the rate of cure is greater than 80%.

In spite of the generally good prognosis for HL patients, those who do not achieve complete remission after initial treatment, or those who suffer a late relapse, have a much less favourable prognosis.

For more quality information about Hodgkin lymphoma you can consult the following websites:

There are other resources and links of interest that may be of use to de Hodgkin lymphoma patients:

If you are resident in Spain, you can also contact us via email comunicacio@fcarreras.es so that we can help put you in contact with other patients who have overcome this disease.