Find out everything you need to know about multiple myeloma.

Rosa Maria was diagnosed with multiple myeloma when she was 60 years old. Thanks to research teams such as Dr. Bladé and Dr. Fernández de Larrea, today enjoys a healthy and disease-free life. Get to know her story! 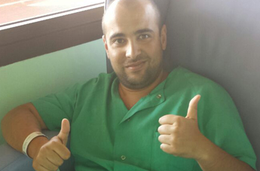 "Hi, I'm Jesus and I'm 36. Four years ago I was diagnosed with multiple myeloma, it was a shock for me and my family."

The research of multiple myeloma is an essential challenge. It is not yet a curable disease and most patients relapse. In spite of this, it is one of the diseases in which more progress are being made and future seems positive. Help us! Become a partner in the healing of multiple myeloma.

Multiple myeloma* is a kind of blood cancer that affects the plasma cells that normally produce anti-bodies that protect the body from infection. It is one of the most frequent blood cancers and it affects mainly older people. In Spain, it has an annual incidence in adults of 40 new cases per million, accounting for 1% of all cancers and 10% of blood cancers. Because their bodies produce these antibodies in an uncontrolled manner, multiple myeloma patients suffer from anemia, bone lesions, renal failure and they have a high propensity to succumb to infections. Unfortunately, it is an incurable disease.

Before bone barrow transplants and the appearance of new drugs, the average survival period for patients with multiple myeloma was only a very few years. But with the introduction of these transplants and these new drugs this prognosis has improved significantly and the survival period is now, on average, more than five years. The prognosis is even better if the patient undergoes an autologous bone marrow transplant (with the patient's own bone marrow), but patients' advanced age and clinical condition often prevent this procedure.

Relapses are frequent, but successive treatments provide the opportunity for ever longer periods free of the disease.

It has been shown that all patients suffering from multiple myeloma have previously passed through a symptomless stage of the disease called monoclonal gammopathy of undetermined significance (MGUS). People diagnosed with these alterations, which are often detected in routine tests and often in old people, have a higher risk of developing multiple myeloma. The research being carried out aims to:

- Identify those patients with the greatest risk of developing multiple myeloma in order to provide early treatment.

- To lengthen the periods free of the disease with new combinations of drugs and increase the possibilities for curing a proportion of patients.