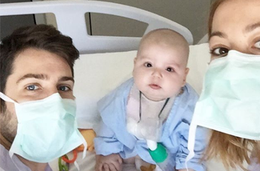 Lydia and Ruben lost their baby, Mateo, with only 8 months, because of leukaemia. The scientific research of leukaemia, lymphomas and other blood cancers is the ONLY opportunity to cure ALL the patients.

One of our research teams is developing great and successfull new procedures to treat a very rare type of leukaemia that affects infants and has a fatal prognosis.

With € 12 helps to maintain this unit of experimentation.

Leukaemia cells can turn into non-cancerous cells through epigenetic changes

Researchers of the Josep Carreras Leukemia Research Institute discover that a leukemic cell is capable of transforming into a non-cancerous cell through epigenetic changes.

All the tissues of our body have the same DNA, but they perform very different functions and have very different aspects. For example, a lymphocyte and a neuron share the same genetic material, but they play very different tasks, and their appearance under the microscope is entirely dissimilar. What gives cells their own identity and differentiates them is their particular epigenetics, the chemical modifications that control gene expression. It has been accepted for decades that the semblance of a tumor cell (its "phenotype") is discordant to the look of its original normal cell. Furthermore, recently, it has been discovered that an extraordinary phenomenon can occur in cancer: one type of cell may become a different type of cell.

This process is known as transdifferentiation and is used, for example, by human tumor cells as a strategy to escape from a drug designed to kill them.

An article published by researchers of the group of Dr. Manel Esteller, Director of the Josep Carreras Leukaemia Research Institute, ICREA researcher and professor of the University of Barcelona, describe how a leukaemia type B cell can transform into a different cell, a macrophage, changing its epigenome and consecutively getting a new cellular identity.

“We began with this work stating that if DNA methylation is the best known and validated epigenetic mark that confers its appearance to cells, such chemical modification could be directly involved in enabling tissue transdifferentiation. By using a cellular model of lymphoblastic leukaemia B cells that we could transform into macrophages, we obtained a high-resolution epigenetic profile of each step of the transdifferentiation process. This transdifferentiation example is interesting since it doesn't only change the cell type, but also its behavior. While a cancerous cell multiplicates fast, a highly differentiated cell doesn’t proliferate at all” -comments Dr. Esteller about the research published in Leukaemia, and adds: “We saw that the epigenome of the leukemic cell changes when it transdifferentiates. Chemically, the cells disguise their epigenome to resemble a macrophage. The changes occur in thousands of sites of the genetic material, even between chromosomal regions far apart from each other, which approach to activate those genes that provide a distinct appearance to the cell. Applications of this discovery could be avoiding the emergent resistance to cancer treatments with drugs: if we blocked the epigenetic changes identified, leukaemia cells could not select the transdifferentiation strategy to escape from the antitumor effect of the drug, and the therapy would be more effective.” –Concludes the researcher.”